The Cloud vs. SaaS: a Complete Guide

“The Cloud”. It sounds like some mystical place: Somewhere out there, but it’s really just another term for the internet. The cloud is the umbrella under which Software-as-a-Service (SaaS), Infrastructure-as-a-Service(IaaS), Voice-over-internet- Protocol(VOIP), eCommerce, eMail, web sites, and pretty much everything on the internet resides.

What is the Cloud?

Since 1958 when Bell Labs researchers invented the modem, converting digital signals to electrical signals and back which enabled communication between computers, the internet as we know it today has become a vast and complex system that much of the world depends on. It wasn’t always that way though. When home computers first became common, you bought software on disks and loaded it on your PC. Early commercial internet use was mainly for email. In fact, there was a period of time when the majority of compact disks (CD’s) in the world were America Online (AOL) CDs.

All the software used was located on your PC and the internet was merely used as a way to get information from point A to B to C. Gradually, the number of computers on the internet grew and the infrastructure to handle more internet traffic grew. Transfer speeds increased, making internet use less frustrating. Sometimes we might get frustrated with ‘slow’ internet today, in a world where my home has a download rate of 400 Megabytes per second (Mbps). I distinctly remember in the 90’s downloading a 3 Mb file and it taking 20-30 minutes. That is a rate of around 7 Megabytes per hour. At today’s speeds, it takes longer to open and close the connection than it does to actually download a file that size.

All digression aside, to be concise the Cloud is the Internet.

But what is the internet? Merriam Webster defines it as “an electronic communications network that connects computer networks and organizational computer facilities around the world.”  They go further to say that it is usually referred to as “The Internet.” Let’s break that definition down a little bit.

“An electronic communications network” – A way to communicate electronically, over an inter-connected group known as a network.

“…that connects computer networks…” – It connects networks to each other.

“…and organizational computer facilities…” – including commercial, civic, and other organization’s networks.

Here is a great diagram made by Ciscopress.com: 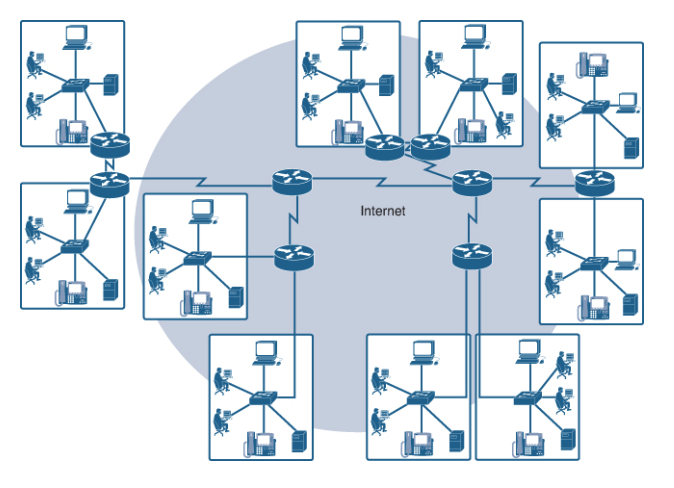 It is estimated that 28 billion devices are connected to the internet right now. That includes all the phones, tablets, laptops, desktops, servers, switches, routers, and home devices such as; thermostats, doorbell cameras, IP cameras, refrigerators, light bulbs, light switches, etc. It also includes over 3 million data centers (just in the US), countless miles of wires and fiber optics, and nearly 60,000 Internet Service Providers (ISPs) like AT&T, Sprint, Spectrum, etc. It’s no wonder that with such an incredibly complex entity, people reached for an abstract concept to explain the internet. “The Cloud” is not just a nice abstract name, it also easy to imagine: Your request goes into the cloud, and your answer comes back.

Here are some common references to the cloud and what they really mean:

Given that most people store personal and sensitive data on the cloud it is also necessary to protect your cloud by implementing strong cloud security. Which is another topic we cover in the following article: Best Practices for Implementing Strong Cloud Security.

What is Software as a Service (SaaS)?

Traditionally, we buy a piece of software either in disk form or by downloading from the vendor’s website (on the cloud) and then install it on our computer by running the setup file. That unpacks all the files required to run the program and writes them to the hard drive of that particular laptop, desktop, or server. We own that software (or hold the license to hold and use it as the case may be) and it runs entirely on our hardware. We are responsible for all settings, configurations, and updates. There is probably customer support, but the quality of that varies by company. When the program is updated to another version, we may have to repurchase it, uninstall the old version, and install the new version. Of course, we will need to check to make sure all the settings and configuration are correct. But for all intents and purposes, we own that software. It is ours and it is always with us and it can’t be taken away.

Compare that to Software as a Service (SaaS). With SaaS, you subscribe to the software you want to use, which in the long term is more expensive, but there is usually not a big price tag upfront. Pricing plans differ, but you can expect a fixed price per user, per month. What you generally get for that, however is first class support, lots of tutorials, and updates as they happen. The software is fully supported in that bugs are regularly addressed, the company is continually striving to improve the product, and you just get to use the new versions as they release.

In addition, the software resides on the software company’s servers. It’s their processors and storage that are in use. You just use a low impact web interface or a light application that takes input and sends it to the software, then sends information to display on your device.

Another huge benefit is that you can usually access this program from any platform that can connect to the internet. If you prefer using your desktop when you’re in the office but need to look up small bits of information in the program when you’re out of the office, you can very easily log into the program from your laptop, phone, or tablet. It provides the ultimate in portability. Surprise call from the boss and you need to answer that question now? Log into it with your tablet. Need to verify the address your next client, just pull it up on your phone.

I don’t want you to think there is no potential downside to SaaS however. As I mentioned earlier, SaaS is more expensive in the long run. You also NEED an internet connection to use it which can be problematic at times. Most importantly, when you stop paying for your subscription to SaaS, you lose access to it. That is a big difference from software you have on a CD.

Salesforce.com: One of the biggest SaaS companies in the world is Salesforce.com. They pioneered cloud-based Customer Relations Management (CRM) software, starting nearly 20 years ago in 1999. Now their client list is over 150, 000 companies long and they made over $10 billion in revenue for 2018. it’s definitely a powerhouse.

Google: Much more than just a search engine, Google offers Google Apps which is now called G Suite. You are probably familiar with some, if not all of the tools in G Suite including; Gmail for email service, Docs for document creation & editing, Drive for cloud storage you can access from anywhere, Calendar for managing your schedule and more. By simply starting a Google account, anyone can use these products for free, that doesn’t mean the company doesn’t make money on them though. Many businesses are paying extra for added features like unlimited cloud storage and 24/7 phone support. Google isn’t very forthcoming when it comes to cloud revenue, but the one time they did, it was to the tune of $1 billion per quarter.

Microsoft: With an estimated 1 billion Windows powered PCs in the world, it may surprise you that Microsoft is the world’s largest provider of enterprise (for corporations) SaaS. They have Office 365 which is the SaaS version of Office 2019. They also offer many office productivity packages under the name Microsoft 365. The company reported revenue of over $32 billion in the last quarter of 2018.

Intuit: Unlike the previously discussed companies, Intuit’s primary focus is on individuals and small businesses vice the enterprise. It has managed to shift its business model from selling CDs you install or software you ‘purchase’ and download, to software-as-a-service. You may not recognize the company name, but you almost certainly recognize their 2 primary products, QuickBooks and TurboTax.  Intuit asks you to “Join 50 million people already using TurboTax, QuickBooks and Mint to power their financial prosperity.” The company reported annual revenue earnings of almost $6 billion in 2018.

If the question is “What is the difference between ‘The Cloud’ and ‘Software as a Service’?” the answer is:

The Cloud is simply another name for the internet which is a giant network made up of many smaller networks.

Software as a Service is when a company offers to run its program(s) on its own servers, making them accessible to the user from a myriad of devices and locations by connecting to the internet.

One thing is certain, while it will probably never completely take over, SaaS is here to stay.

If you are a business in need of assistance securing your SaaS environment, don’t hesitate to reach out for expert network security advice. RSI Security can help.

Enterprise Information Security Architecture: What You Need To Know

Bring Your Own Device Security Issues and Challenges

The Essential Characteristics of Cloud Computing

Is It Safe To Store Personal Data On...

What is the NIST Cloud Computing Reference Architecture?

Essential Guide to Getting Started with Cloud Encryption

Managed IT Services vs SAAS: What’s the Difference?